Bouquet is an exclusive character to the anime. In the original version, Bouquet has an overall fan-service appearance, in that her breasts are very large.

This is censored in the English Broadcast versions, with smaller breasts, instead of the actual breast size in the original version.

Being a member of the Ra Clan, Bouquet has the ability to become invisible, but must strip in order to be completely unseen, which is edited out in the dub where she is depicted as being able to turn invisible whenever she wants. On one occasion, she was somehow detected by Delphinium and later by Investiture beings.

Bouquet has a round face with a light-tan complexion, small round lavender eyes, mid-back gray/black hair that's pulled up into high pigtails on the sides of her head. She has two long strands of hair that usually fall in front of her eyes. In season 1, she wears a light blue, short dress which is covered up by her white apron; around her neck is a thick blue collar. The dress seems to come as "tight" and makes Bouquet's chest stand out. This also shows she has large breasts (despite her young age). She wears thigh-high skin tight socks and blue flats with a lavender fold. Around her forearms are blue "sweat bands" that start near the elbow and end at the wrist.

In season two she wears a pink halter top with an odd three-hexagonal shaped pattern on her chest. She wears a dark pink sash around her waist, a short pink miniskirt, dark pink short shorts underneath, "forearm-warmers" (refer to last sentence in above paragraph), dark pink leg-warmers that stop at the intersection of her thigh and lower leg, and brown flats with a white fold.

Bouquet can be defined canonically beautiful within the universe of Blue Dragon. In addition to Marumaro's ruthless attentions, her appearance has enchanted several characters within the series, like a group of soldiers, Noi and Shuu himself, who on some occasions has shown himself to be very attracted by the physical qualities of Bouquet.

Bouquet has the power to turn herself invisible, but (in the uncut) must strip to become invisible to the naked eye. In the dub, all she does is untie her apron and she disappears with "sparkles" covering her body. She also has the power to summon her Shadow and transform into anything she sees. Later in the series she also gets the power to copy an enemies attack.

In Tenkai no Shichi Ryuu, she gains the power to merge with someone else and their Shadow thanks to Noi's power. She transforms into a pink sphere, which needs to be grabbed by the one she's merging with.

Shu and the others first encountered her in a restaurant as a waitress where she was being harrassed by two customers that Shu and Zola fended off. After losing her job, she follows Shu to Jibral and Gran Kingdom until she later joins their group, quickly developing romantic feelings for Shu.

After asking Shu many questions, all to which he replies "yes" with, she asks him to marry her and provides the same answer, not realizing the question until after he says it. She then teases him and Kluke by saying he is her fiancé, which makes Shu and Kluke angry. She is eventually allowed to join the group, though she gets into conflicts with Kluke because they both have feelings for Shu, though Kluke refuses to admit hers (Bouquet is still aware of them regardless). She is hated by Cynthia after some of the soldiers in Gran Kingdom's army called Bouquet the prettiest girl in the world when she showed off her looks to them (the plan was something Marumaro came up with to have some fun with an easy fight). Bouquet was soon sent on a mission to retrieve seven legendary pages. After solving her page she gained the power to copy any attack which was used on her, and she is able to defeat Szabo.

Two years later, she and Shu are working in a resistance against General Logi. Although it has been two years Bouquet is still chasing Shu and trying to win his affection, with Marurmaro trying to get a little love from Bouquet of course. They meet Noi and her Shadow was reawakened. Shortly after, Noi gives her and her Shadow the ability to merge with Shu and Blue Dragon. She also developes a friendship with Lota, and later on she and Shu save her from Rudolf.

She first met Shu when he saved her from being harassed by two men at the restaurant. When Bouquet saw Shu after this heroic display, it was love at first sight. She asked if she could join their team, but Zola says it's up to Shu. The latter declines at the end and urges Zola to speed up the wagon so they can escape Bouquet. Not willing to give up, Bouquet chases after the group. She returns in episode 9 and starts this habit of pulling Shu into her chest, something that angers Kluke to no end. Towards the end of this episode, she is able to "trick" Shu into marrying her. She's seen throughout season 1 trying to hog his attention, declaring that she is indeed his fiancee.

In Tenkai, her relationship with Shu seems to have grown, as Shu doesn't seem to avoid her as much, and also appears that Shu may have the same feelings as her. In episode 14 when Bouquet asks Shu why he dreams of Primella and not her, Shu replies, "I can't help it since it's a dream. I thought you wouldn't mind such trivial matters." to which Bouquet responds, "I don't mind." causing Maru to whisper, "I think she really does mind."

Their relationship isn't close. Kluke stuck up for Bouquet in episode 6 when Marumaro was trying to grope her. However in episode 9, the two sorta clashed over Shu; starting a love triangle. She was very angry when Bouquet was able to get Shu to agree to their marriage. In season 1, the two are seen fighting over Shu and seem to cooperate a bit better after episode 34.

In Tenkai no Shichi Ryuu, their relationship isn't as hostile. In fact, Bouquet seems to let go of any jealousy towards Kluke by episode 30. Kluke also doesn't seem to have any jealousy towards Bouquet anymore. She also greatly cares for Kluke, as seen when she and Marumaro went to Kluke's village to save her from Rotta.

The two don't really interact that much and the only time that they do, is when Jiro's mocking Shu, causing Bouquet to react to his rudeness in Shu's defense.

In Tenkai no Shichi Ryuu, not much is known about their relationship.

Much like her relationship with Jiro, Bouqet and Zola rarely interact with one another. However, much like the others, Bouquet did doubt Zola's actions towards the end of the season.

Bouquet doesn't really like Marumaro, for she's usually the target of his perverted actions in both season 1 and Tenkia no Shichi Ryuu.

The don't interact often, but, along with Marumaro, holds him back when he tries to fight Zola in season one. She also breaks up his and Shu's fight later in season two and pulls him and Marumaro away from Shu and Kluke so that they can be alone together. 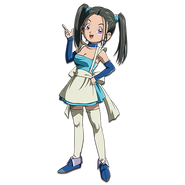 Soldier in love with Bouquet 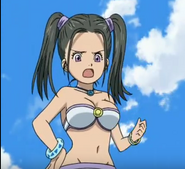 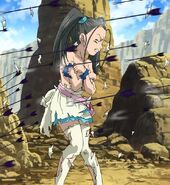 Bouquet undresses in front of everyone

Add a photo to this gallery

"But I know you didn't mean it. Don't be embarrassed, just be honest!" - episode 9

"You have no right to speak to me like that, Kluke!" -episode 34

Retrieved from "https://bluedragon.fandom.com/wiki/Bouquet?oldid=8528"
Community content is available under CC-BY-SA unless otherwise noted.