The Shadow Comes Forth

In the game, Kluke grew up with her friends Shu and Jiro in Talta Village. She lost her parents to the Land Shark a year prior to the start of the game. Kluke is dragged along on an adventure with Shu and Jiro when the boys set up a trap for the Land Shark. When she arrives on Nene's fleet for the first time, she gains her Shadow, a blue Phoenix. In Lago Village, she identifies the cure for the sickness (A Gabo Leaf) contaminating Marumaro's villagers and family. Because her parents were doctors, Kluke wishes to become a doctor as well and has an understanding in medicine and (most likely) first aid. Later in the game, she is captured by Nene and used as bait to trap Shu and the others. A "bomb collar" is strapped around her neck and "within one hour, it will explode", thus adding further stress onto the group and Kluke herself. She, like everybody else, soon learns how to master the Corporeal form of her Shadow and from there continues her adventure. At the very end of the game, they (basically every important minor character) celebrate her birthday. Shu and Jiro confront her, asking her to choose who she likes more to which she responds, "Can you guys wait until my uh, my next birthday?". She is seen once again laughing along with Shu and Jiro as the camera zooms away from the New World.

Kluke is very different in the anime than she is in the game. She still grew up in Talta, only this time with Shu and three other boys. Though feisty and constantly hitting Shu (albeit having a crush on him), she really does care for her friends despite her outbursts. She is the last to obtain her Shadow (episode 14) and even then, she expresses concern about feeling "useless". Just like in the game, however, she did lose her parents prior the episode one, but it's never revealed how they died. When she was younger, she had Shu to comfort her and vice versa, since he too lost his parents to an unknown catastrophe. In contrast to the game, Kluke is a gifted mechanic, able to operate and fix any machines she comes across. She also has a slight obsession with machines. Whether this likeness for machines was brought on by a former parent's career choice or job is unknown. But Kluke's tinkering has come in handy for the gang many times on their quest. Kluke's personality is that of a tsundere in the first season of the anime.

Season 2 Kluke is a lot more calmer than season 1. She is a very mature and wise person for someone of 12 years old, and this was probably spurred on by the events of the first season. She has grown to dislike fighting and works at a hospital, tending to the survivors of the war against the darkness. Aside from working at the hospital, Kluke "babysits" the children from the village, most of who have lost their parents in the war. She lives with Andropov and assists in helping him recover. Like everyone else, she has no Shadow and she uses this as an excuse to ward Shu off when he comes to recruit her for the Resistance. Eventually, she does end up assisting everyone after her Shadow is resurrected when she protects Andropov.

In the game, Kluke dons a plain black dress with collar neck and no sleeves which includes a yellow sash tied around her waist. She wears magenta sweatbands and matching socks, small brown boots with a tan overhang, and a magenta colored bow in her hair. Her skin is slightly tan in contrast to her anime counterpart. She has brown hair and brown eyes. A fringe, or bangs, hangs in a somewhat arc shape in front of her right eye, often mistaken for hanging in front of her left eye. The bangs are present in all of her appearances so far.

Kluke dresses the same attire as her game counterpart only a different color palette. Also, her physical features have been altered just slightly. Her hair is auburn brown, a lighter shade than her game counterpart, a slightly paler skin complexion, and green eyes. Her dress is a light pink, the bow is yellow rather magenta, and her boots are white with a yellow overhang.

Her outfit differs from the game and anime in season 2. She wears a white undershirt with a long-sleeved, bare shoulder light blue shirt with dark blue encircling the cuffs. She wears blue shorts with a light blue (the same color as her overshirt) skirt with dark blue trim. Her boots are slightly longer and grey with a matching overhang. The only thing present from her last clothing would be her yellow sash. Kluke's physical appearance remained the same for the most part, but her hair is slightly longer, she no longer wears a ribbon in her hair, now has small breasts, and her face seems longer as well.

Kluke is a very mature person beyond her age. She is caring, maternal, and always ready to help anyone in need. However, as revealed by Jiro in a cutscene, Kluke had a habit of running off somewhere alone and breaking down into tears. Haunted by the deaths of her parents, she would replay the scenes in her head until she cried. Shu knew about this and confronted Jiro, concerned, but nobody confronted her until Jiro was with Kluke. He told her it was okay to cry, and it's implied she took that advice in Devour Village. There are times where she outright teases Shu, but not out of malice, but more of a brother-sister sort of way.

Her personality was altered greatly come anime. She became feisty, energetic, but very kind and to an extent, a tsundere (can be himedere sometimes). She started out in the series carrying around a gun that shot pink fists and rode a motorscooter, both of which weren't present in the game. She seems to know nothing about medicine or healing in general in contrast to the game. Kluke has a bad habit of hurting Shu and Marumaro physically, and she also has somewhat of a competition with Bouquet as they both like Shu. Kluke is extremely jealous of Bouquet's relationship with Shu, but she'd never admitted this (more emphasis on her tsundere personality). However, despite most of her flaws, she generally is a caring person shown immediately in episode 2 where she hugs Shu after he bails out of the house after arguing with Zola.

Mirroring most of her game personality, Kluke is a wise person. She actually seems more mature than her game counterpart, but this could be due to the timed passed between season 1 and 2. Kluke has become more maternal and loving, much like her Shadow. She does not physically punch Shu or Marumaro, but she still maintains some of her sly side. She still cares for Shu as shown in episode 30 but she does not show it like season 1. It becomes clear in episode 43 when she said emotionally he must come back safely from Zemy. Kluke seems to have lost all malice for Bouquet and no longer cares about the relationship between Bouquet and Shu since she's busy with the hospital, children, and Andropov. In this season, Kluke and Shu are more than just childhood friends because the both of them will share the same romantic feelings that they share and they will love each other.

Kluke's Shadow is  Phoenix. In the game, Phoenix is not known to talk, like every other Shadow. However, she does have a talent for the Black Magic class, elements and shadow magic. In the anime, Phoenix is capable of speaking and is very motherly and supportive to Kluke and the others. Phoenix is capable of using barrier magic (Feather Protect) and teleportation and possess no skills over any elements. She is not a combat Shadow as shown in the game, but rather a supportive one instead.

In the anime, Phoenix is voiced by Michelle Ruff, Kluke's anime voice actress. 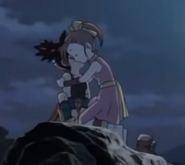 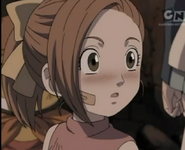 Add a photo to this gallery
Retrieved from "https://bluedragon.fandom.com/wiki/Kluke?oldid=8799"
Community content is available under CC-BY-SA unless otherwise noted.