Blue Dragon Wiki
Register
Don't have an account?
Sign In
Advertisement
in: Robots, Playable Characters, Blue dragon plus,
and 2 more 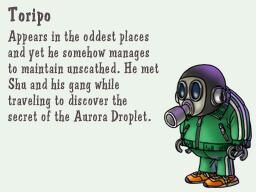 Toripo is a robot adventurer with a green jumpsuit, in the Blue Dragon video game series

Toripo first appeared on a journey to find the Aurora Ruins and offers Shu and his friends stat-enhancing items in exchange for Medals. Toripo can be met at the end of the game on the cube where Kluke's birthday party is being held. He will talk to the player and break the fourth wall, talking as Akira Toriyama and commenting on the game.

"This is my real voice. When I visited the developers, they asked me to say "Toripo" so they could record my voice. No! Embarrassing! But everyone worked so hard to finish this game. I was really moved! It reminded me of how hard it is to make a game. All those on the staff, and so many hours spent. I loved it when they let me test it out! It was wonderful! They were real pros! Great things come when you have great people. Didn't you love this game? I was a bit nervous, worrying, 'What if they say my character design isn't good enough?' (Even if you did think so, please don't say it; I really am a sensitive guy). Again, thank you all very, very much. I will keep on studying more and more. One more time! Toripo!"

In Blue Dragon Plus, Toripo is found in a Mecha Robo factory and was freed from the machine once it was offline. He explains he was on an adventure and stumbled upon a device that gave robot's a soul, which then allowed him to get his Shadow, Tarantula. He joins the party in their quest to shut down the cube world they were in.

In Blue Dragon: Awakened Shadow, Toripo is seen with his shadow on another adventure, it is unknown if he has anything to do in the plot. He is revealed to have been comissioned by an in-universe Akira Toriyama on his deathbed, designed to write amazing manga after Toriyama passes away.

Toripo has shown to be able to explore places, even the most dangerous like the field Moon Lasers. His weapon in Blue Dragon Plus is a harpoon.

Toripo gained his Tarantula Shadow after getting a device that gave him a soul. Tarantula gives it wielder Barrier magic.

Community content is available under CC-BY-SA unless otherwise noted.
Advertisement